Every now and then Howtomakeadollar sees something in the news about a gigantic atom smasher in Europe called the "Large Hadron Collider". Recently the thing supposedly recreated the Big Bang somewhere near Geneva. I would have thought that this would have caused a certain degree of disruption around the universe, but apparently it was just a very small big bang, and did not shred the space-time continuum or cause the universe to catch on fire. Aside from those details, everything else was pretty much the same as the original bg bang. You can read about this machine here. However, this is not my main point.

Before I get to the main point I would like to say that I really don't understand the appeal of spending $10 billion on a machine that "smashes" atoms. What do they have against atoms? Are they not small enough already? Too many of them? 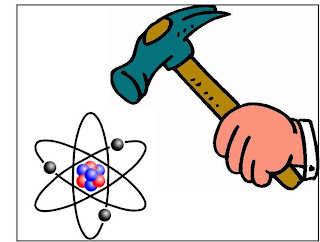 Atom Smashers: Because atoms suck. Thats why.
In any case, scientists hate atoms, and take great joy in smashing them into infinitely small little bits. Of course, atoms are already infinitely small, so again, I don't get it. Howtomakeadollar has several solutions for you to make money as a personal atom smasher for the European mad scientists. Remember, they spent $10 billion on a big machine, so this is a very lucrative business.
Best way to make money smashing atoms
1. Get a hammer
2. Find an atom somewhere.
3. Hit the atom with the hammer
4. Make sure scientists are watching
5. Collect money.
I'm pretty sure that hammers can smash several million atoms at one time. For that matter, hammers can smash pretty much anything, so it is good to have a few around at all times in case you need to smash stuff.
Second best way to smash atoms
1. Find Chuck Norris
2. Tell him that an atom has insulted his mother
3. Stand back
4. Make sure scientists are watching
5. Collect money

Atoms live in fear of Chuck Norris. Thats why no one has ever physically seen an atom anywhere near him. He is practically a black hole, except he knows how to kick people really hard, which black holes don't.

Posted by howtomakeadollar at 5:53 PM