How to Make Money from the Super Bowl

The Super Bowl is a big deal, and tons of money is spent on it every year. In big markets like this you can do pretty well by simply gaining a tiny fraction of the overall market. You don't have to be a genius. Thats good for you, because statistically speaking, only like 1% of the population is a genius, so you probably aren't.

Fortunately for you, the screening process for Howtomakeadollar writers is very strict, and we are all geniouses. (sp??)


Idea: Sell "Tickets"
How the Business Works: Relatively few people have ever been to a Super Bowl, so most people probably don't know what tickets look like. This is where you come in.
1. Go to a county fair
2. Get a bunch of those tickets that say "admit one." I'm pretty sure thats what Super Bowl tickets look like.
3. Write "Super Bowl" on the tickets with a sharpie
4. Sell on Ebay, or if you happen to live near Miami, you can go to the stadium and scalp them outside 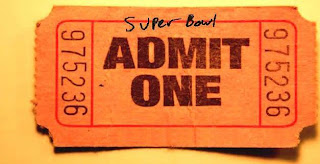 Idea: Sell hotdogs and beer
How the Business Works: You've probably been to a sporting event, and you may have seen people going around selling hotdogs and beer. They work for the stadium, so they don't keep the money they make. This is where you come in.
1. Get a bunch of hotdogs and beer.
2. Sneak into the stadium. (I doubt this will be very difficult.)
3. Run around shouting about your cold beer (does not have to be cold) and your hot dogs. For the beer you have to promote it as colder than any other beer ever, or else people will buy beer from a different guy who convinces them that his is colder. Hot dogs are easier. Just yell "Hot Dogs!" frequently. There are very few appropriate adjectives that can make a hot dog sound more appetizing. Either people want them or they don't.
4. Sell them to people for a dollar.

Idea: Make Bets
How the business works: Lots of people like to make bets on sports events, especially the Super Bowl. Only about half of these people win their bets. Howtomakeadollar has a better way.
1. Go to a Super Bowl party
2. Offer any bet on the game outcome that someone is willing to take. It makes no difference who you bet on to win. Just bet against whatever the other person says.
3. Watch Super Bowl
4. If your team wins, make sure the other guy pays up
5. If your team loses, insist that you actually bet the opposite way, and make them pay you. If they refuse, offer a compromise in which no one pays. Tell the person that its just money, and that you forgive them.

Posted by howtomakeadollar at 7:49 AM