How to Make Money by Making Islands out of Garbage

Business Plan:
1.Collect garbage from people for a fee.
2. Look around on Craigslist to see if anyone will let you borrow a barge for a few weeks. (A good rule of thumb for barge aquisitions is that bigger is always better)
3. Put the garbage into the barge

4. Drive the barge out into international waters, preferably somewhere warm

5. dump the garbage out

6. keep track of the location where you dumped it

7. repeat steps 3-5 until you have successfully built an island. I doubt this step will take very long.

9. Dig up a barge load of sand

10. Dump the sand on top of the garbage island

12. Repeat steps 8-11 until garbage island is covered in sand

14. Get a bunch of coconuts and dead crabs.

15. Distribute them evenly around the island

16. Hire some women to walk around

17. Subdivide island and sell off portions of it to developers

18. Collect garbage generated by island tourists for a fee

Business costs: Sand can be expensive, which is why Howtomakeadollar recommends digging it up from beaches at night.


As a side note:  some guy actually spend $16 billion making his own island (pictured below). 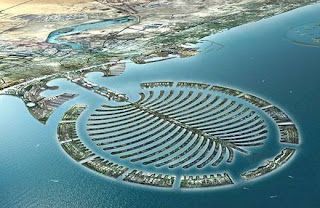 What was he thinking?  He would not be in such serious financial ruin right now if he had used peoples trash!

Additional option: There is an existing trash island?  Almost.  The Great Pacific Garbage Patch is growing!  Just get a big net or ball of yarn to link the trash together.  Its an island that will keep on growing!

Posted by howtomakeadollar at 1:00 PM