Russian Finance Leader Turns to Alcohol for Answers, Suggests You do the Same


Ok, well, in our last attempt to solve the global financial crisis, we suggested destroying stuff as a means of stimulating further production. This idea was, of course, utter lunacy, and has not worked very well. Nonetheless, if you are looking for an economic theory to justify your most recent car accident,Keynesian Economics is a good place to start.


But, if you are more inclined to discussing fiscal policy while falling into a drunken stupor in a smoke filled bar, then you should forget about Keynes and head to Russia. After all, if we learned anything from the past hundred years, its that when you need a good primer on effective economic theory, you should ask the Russians. And, naturally, just when the world needs a good idea, the land of 100 trillion rubles has come up with one.


Just this week, Russian finance minister Alexei Kudrin urged all Russians to "Drink more alcohol and smoke more cigarettes..." Not kidding. Kudrin has been finance minister of Russia since 2000. He says that high taxes on cigarettes and alcohol help pay for Russia's social services, and he believes that if more Russians drink and smoke more, they may be able to pull Russia out of its deficit. Kudrin is the Russian equivalent to the U.S. Treasury Dept. and Federal Reserve combined, so presumably he knows something about economics. However, after looking into it, I've found that his primary qualifications for the job are:
1. Vladimir Putin appointed him.
2. Everyone who disagrees with Vladimir Putin has died in mysterious cases of accidental firing squad.

One of these two men rose to the top of the Soviet KGB and took control of Russia through assassinations, threats, and rigged elections. The other is a villain in a James Bond movie.

Well, enough about Czar Putin. Lets talk economics. Specifically, does this idea make any sense whatsoever? Lets consider the angles. Russia's primary exports are:
1. Oil, which they sell to China and Europe,
2. Black market weapons, which they sell to Iran, North Korea, Venezuela, and me.
3. Thats it.

So, from the perspective of a finance minister with no professional qualifications whatsoever, it is easy to see how you could wind up turning to the bottle for your answers. Oil is good for your country, but oil alone can only get you about as far as Iran, which is a pretty lousy country. Selling nukes to third world dictators is a dodgy business that you would rather not think too hard about. This leaves you in a bad situation. May as well find solace in the drink. And once you're getting drunk and puffing on a cigarette, you may as well become a government appointed pusher and get everyone else to join you.

And now, some fun with pictures 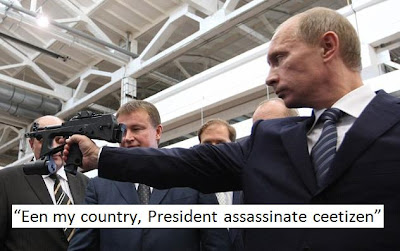 Here's Vladimir Putin waving a crazy gun around in public. I think he's a reasonable guy to be in charge of the world's largest nuclear weapon cache, don't you? Aren't you glad the U.S. took the lead on nonproliferation? 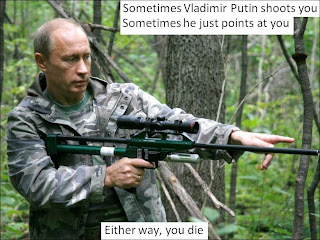 Posted by howtomakeadollar at 5:56 AM

Labels: Businesses that Do Well in my neighborhood, Government Nonsense